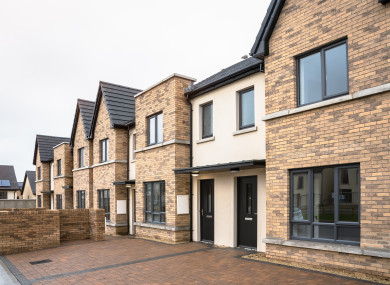 THE CENTRAL BANK is to increase mortgage borrowing limits for first-time buyers, raising the limit to four times their gross income.

The new rules will see the mortgage borrowing limits for first-time buyers rise from three-and-a-half times their gross income.

The previous limit had been in place since 2015.

However, this will be increased for second-time buyers, rising from 80% to 90%.

This means that deposits of 10% of a home’s value are now required for both first and second-time buyers.

Additionally, there will be changes to how a first-time buyer is defined, with borrowers who have been divorced/separated, have undergone bankruptcy or insolvency may now be considered a first-time buyer, if they no longer have any interests in their previous property.

These changes are set to come into effect from 1 January 2023.

The loan-to-income ratio for second-time or subsequent buyers will remain at 3.5 times the buyer’s income.

The Central Bank has said that “This change recognises the different roles played by different borrower types in the housing market.

“First-time buyers have been shown to be lower-risk in Ireland, and are generally at an earlier point in the income lifecycle and more likely to experience income growth during their mortgage.”

The Central Bank has said the allowance share that lenders will be permitted to give mortgages above the limits is 15%, to allow for flexibility around an individual’s circumstances.

The changes to lending rules come after an 18-month-long review of the mortgage lending framework, with the Central Bank saying it had examined the experiences of other countries alongside holding consultations with the Irish public and stakeholders.

In a statement announcing the changes, Governor of the Central Bank Gabriel Makhlouf said that while the benefits of these changes might not be apparent immediately, they will help in the long term.

“The mortgage measures are essential in our mission to serve the public by maintaining the financial stability of the economy and households as a whole, so it is good policy practice to review these given the broader changes in the economy,” Makhlouf said.

“While not always immediately visible to people in their daily lives, the benefits of the measures are long-term.”

Maklouf said that both affordability and access to housing remain key challenges and said that there was a need to increase the supply of housing.

He added that changes to policy would have an impact, both positive and negative, to broader society.

We are acutely aware that like all policy interventions, the mortgage measures have both benefits and costs to society. A lot has changed since the measures were first introduced. The changes we are announcing are both targeted and proportionate, and recognise the resilience built up over the last decade and the structural changes across the economy.

‘There will be a modest effect on house prices,’ he says, but says there are multitude of factors that go into house prices.

Says this change on its own – if you ignore things like wages go up – and assuming we are in a vacuum, then it would have a modest effect.

When asked if the timing of the change was bonkers, due to currently rising interest rates, Maklouf said that the changes were not decided last week and that there had been a thorough review of the measures.

He added that if had not thought that it was a good time to implement the changes to lending rules, he would not have made them and that his job is to ensure that there is financial stability.

The governor was also asked about the exemptions that banks are permitted to give customers – which typically have allowed some customers get mortgages 4.5 times their income instead of the 3.5.

Vasileios Madouros, Director of Financial Stability at the Central Bank of Ireland said “lenders themselves are responsible for affordability assessments” under their own policies, which he said like the measures announced today, also need to evolve.

Asked whether banks can decide to go beyond the typical exemption of 4.5 times someone’s income, he said: ‘It is the responsibility of the banks to do their own credit policies.”

Maklouf also said during a briefing on the new measures that someone’s track record of paying rent should also be taken into account when they are applying for a mortgage.

“A prudent lender should be doing that already as part of their own assessments,” he said.

Madouros and Maklouf both stated that the rental market is a very difficult situation that people are dealing with, but both reiterated that the core issue is around the supply of housing, including in the rental sector.

In 2021, figures published by the Central Statistics Office (CSO) showed that more than three quarters of renters who share accommodation with others believe they will never own a home.

Writing in The Journal about the review of mortgage lending last year, Vasileios Madouros of the Central Bank said:

…our mortgage measures support good lending practices, guarding against a repeat of the credit boom and bust cycle that we saw in the 2000s.

At all points in time, there is a role for ‘guardrails’ to lending standards. They support good lending practices, preventing the widespread financial difficulties that we saw a decade ago due to unaffordable debt levels. They also aim to reduce the risk of another credit-fuelled house price boom.

House prices saw an upwards trend during Covid. They have risen by almost 8% compared to last year, despite a small drop in the last three months, according to the latest property price report from MyHome.ie.

New mortgage customers need “significantly higher incomes” to purchase homes now compared to a decade ago, according to a new report published in May by the Banking & Payments Federation Ireland (BPFI).

Article by Journal.ie – With reporting by Jamie McCarron, Aoife Barry and Christina Finn