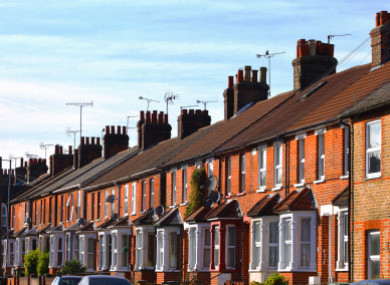 THE CABINET HAS signed off on a temporary ban on evictions from next month until the end of March.

Housing Minister Darragh O’Brien said the temporary ban was brought in in light of the “severe pressures” on emergency accommodation.

An estimation that there are 2,273 tenancies due to terminate over the winter period is understood to be one of the drivers for the Government to reach its decision to introduce a ban.

The minister told RTÉ’s News at One: “We want to make sure that we can protect tenancies through these winter months, whilst also respecting fully the rights of the property owners.”

Under the plans, notices of termination can be issued to tenants but the property does not have to be vacated until the ban is phased out next year, with the last date on 18 June.

There will be exceptions to the ban, including non-payment of rent, antisocial behaviour or using the property for purposes other than what it is let out for.

O’Brien also said that notices to quit issued before the legislation is implemented – which is expected to be on 1 November – will not take effect until the moratorium ends.

New legislation will be required to implement the ban, which is expected to be introduced next week.

Tánaiste Leo Varadkar said today that a legal challenge to the ban “may well happen” but “would be unsuccessful”.

Speaking to reporters this morning, Tánaiste Leo Varadkar acknowledged the possibility of a legal challenge and said: “In relation to the constitutionality of this, anyone can bring a challenge to the courts, that may well happen.”

However, he added: “If the Attorney General and the Minister can make a strong case to defend it on public interest grounds, then I think any challenge would be unsuccessful.”

O’Brien confirmed last night that Cabinet will meet this morning to consider a ban on evictions over the winter months.

Minister O’Brien told RTÉ’s ‘Monday Night Live’ programme that the proposals will be “time-bound measures to give further protections to renters.

However, Minister O’Brien warned of “unintended consequences” and a “further flight of private landlords” if the measure isn’t “calibrated properly”.

He added that the measures due to be brought before Cabinet this morning “will be significant”.

Speaking to RTE’s Morning Ireland, the chairperson of the Irish Property Owners Association said her organisation is “seriously considering going to the courts” over the proposed legislation.

While Mary Conway said it sounds as though an eviction ban is “inevitable”, she said it “hasn’t been thought through enough”.

She added: “This eviction ban isn’t going to do anything other than make the Minister feel that he’s achieved something, and what happens when the eviction ban is lifted.

Conway also said landlord are leaving the market due to “over-regulation and over-taxation” and that the associations members “are very distressed about this”.

The chair of the IPOA said she was seeking tax breaks from the Housing Minister, but that he was “very non-committal” during a meeting yesterday.

Meanwhile, the Tánaiste this morning acknowledged that the eviction ban “isn’t the solution to the problems we face, but is just one action that we are taking”.

He said the ban would provide “breathing space” to put in place more social housing and emergency accommodation in the face of a major shortage.

“It’ll still be the case that if the tenant doesn’t pay their rent, or if they’re engaged in antisocial behaviour, that’s they can be still required to leave,” said the Tánaiste.

“That time, that breathing space is needed.”

Responding to a question about his previous comments resisting an eviction ban, Varadkar said that with “rising numbers of people losing their homes” and increasing numbers of asylum seekers arriving in Ireland, “things are going to be very tight.”

But he added: “That doesn’t take away the concern that I have, that when it ends at the end of March or April, the problems that we have don’t go away.

“What we have to focus on over the next five months is redoubling our efforts to provide more accommodation, particularly more social housing.

Speaking on the RTÉ’s Monday Night Live programme last night, Sinn Féin’s Housing spokesperson Eoin Ó Broin said his party “will work constructively” with the Housing Minister on the eviction ban “to get it right”.

However, Deputy Ó Broin added: “A ban on no-fault evictions for four or five months in and of itself won’t fix anything unless the Minister also outlines what additional measures he is going to take to increase the supply of social and affordable housing.”

“If we take a five month ban on evictions,” said Ó Broin, “it will stop some people from going into emergency accommodation or rough sleeping.

“But if on the other side we still have the undersupply of social and affordable housing, things get worse and there are concrete measure the Minister can take to accelerate this.”

In a statement this afternoon, the Peter McVerry Trust said it “strongly welcomes” the eviction ban.

“The ban will step the flow of people exiting the private rental market and allow the homeless sector time to address rising homeless numbers across Ireland,” it said.

“A no-fault eviction ban will keep vulnerable tenants in their homes during the coldest months of the year whilst also protecting landlords from anti-social behaviour,” the charity said.

“We recognise the vital role that landlords play and want to highlight the importance of addressing tax reforms to ensure that private landlords do not continue to exit the market,” it said.

The charity said “it’s crucial that this ban forms part of a co-ordinated package to ensure that it doesn’t just postpone the problem until the spring and leads to long term reform and a reduction in the numbers of people living in homelessness”.

The Simons Communities of Ireland have also welcomed the ban.

Wayne Stanley, head of policy and communications at the charity, said: “Without the moratorium, too many families would have fallen into homelessness and perhaps had to face a situation of having to sleep rough.”