House prices jump a further 12.3% with double-digit inflation to stay 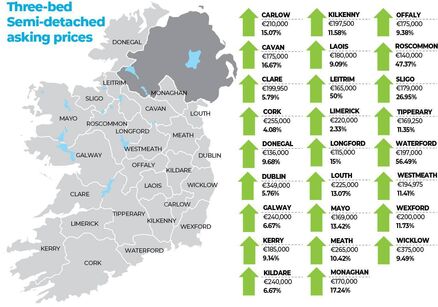 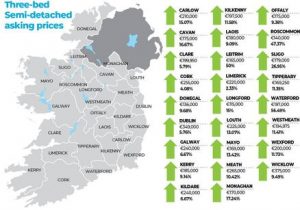 Reports from Daft.ie and Myhome.ie show no let-up for the squeezed housing market

Ireland’s squeezed housing market will continue to see double-digit percentage increases in prices until the middle of this year at least, with two new housing reports confirming further surges.

The surveys show no let-up in the market squeeze for homebuyers, with property website MyHome.ie reporting a 12.3% annual increase in asking prices and Daft.ie reporting an 8.4% jump.

Since January, house prices have increased by 2.4%, Daft.ie said. It was the seventh consecutive quarter of house price growth.

While there were modest increases in prices in urban areas, both reports show prices rising faster in rural areas outside the five main cities.

In Munster house prices increased by 2.7% between January and March according to MyHome.ie.

According to Daft.ie the increase in Munster (outside the cities) was 13.3%, while in Leinster, excluding Dublin, prices rose by 8.7%.

Despite record levels of new home commencements by the construction industry, the lack of supply remains the most significant issue impacting housing prices.

The surging cost of building materials could prove a challenge for the delivery of new home projects, Conall Mac Coille, chief economist at Davy said.

He was referring to the 18% rise in the cost of vital building materials which could threaten the viability of housing projects that are key to addressing the severe shortage in homes throughout the country.

He said that homes are being sold at 6.5% above asking prices, reflecting the froth in the market, and that one-fifth of homebuyers who secure mortgage approval are now failing to secure a property.

While the number of new homes starting construction has reached record levels, there are fears that the soaring cost of building materials could impact the time it takes for them to come to market.

Construction industry sources have said the surging price for materials and the difficulty in sourcing some products pose a real risk to the State’s target of building between 30,000 and 35,000 homes each year.

“CSO data on building materials inflation was 18% in February, posing a viability challenge for many development projects in the pipeline,” said Mr Mac Coille.

Speaking to the Irish Examiner on inflation, Conor O’Connell, director of the Construction Industry Federation for the southern region, said:

“We’re currently engaging with several Government departments on the extraordinary cost inflation in the industry and we won’t be commenting further until we have concluded those discussions.”

Mr Mac Coille said there were signs for optimism in new instructions data, even though that was still running well behind pre-pandemic figures:

Increases remain smaller in urban areas, compared to rural areas, although the gap is narrowing. In Dublin, Cork, and Galway cities, prices in the first quarter of 2022 were roughly 4% higher on average than a year previously, while in Limerick and Waterford cities, the increases were 7.6% and 9.3% respectively.

Speaking on the Daft.ie report, economist Ronan Lyons said prices have increased quarter-on-quarter nationally for seven consecutive quarters since early 2020 when the impacts of the Covid-19 pandemic were first felt.

“If Covid-19 has done anything to the housing market in Ireland, it has been to take a shortage that was concentrated in urban areas and spread it all across the country,” he said.

Both new and secondhand supply remain weaker than expected before the pandemic. Combined with unexpected strong demand, due to accidental savings during lockdown, this has driven up prices.
“Additional supply — of all types of homes, for sale but also market rental and social rental housing — remains the only real solution to solving Ireland’s chronic housing shortage.”